Everything, you will know everything about deodorants!

Discover the mechanisms of perspiration and deodorants on the market

In the series "Beauty Fact Check", we decipher the world of beauty with you. The theme of the day: deodorants! We hear a lot of controversy, and we wanted to write an article to give you information on the ingredients of deodorants and antiperspirants on the market.

To introduce this article, a little background on the sweat mechanism: there are technical terms but don't worry it's simple!

How and why do we sweat and have bad smells?

First of all, sweat is secreted by two types of glands: we find eccrine sweat glands all over the body, which allow us to thermoregulate : in other words, when we are hot, they allow our body to cool!

Then, the apocrine sweat glands are found mainly in the armpits, breast and pubic areas. The secretion of this gland does not appear until puberty. It is stimulated by emotions such as fear or even sexual arousal. Long live puberty!

Our small sweat glands both secrete sweat which is mainly made up of water , mineral salts and organic matter .

The odor comes from the decomposition of organic matter caused by bacteria that we naturally have on the surface of the skin. And yes ! Our skin is protected by a bacterial flora which makes it possible to form a barrier to pathogenic bacteria and prevents inflammation of the skin.

Apocrine sweat is richer in organic compounds, and this is what makes the odor more marked in the armpits, breast and pubic areas.

Sweat is therefore linked to bad smells and humidity which can be very unpleasant for oneself and for others… The image of sweat is therefore directly associated with neglected hygiene. What is wrong are just natural mechanisms in our body! But to fight against its inconveniences, antiperspirants and deodorants exist.

How do they work?

The purpose of anti-perspirants is to prevent the secretion of sweat, and thereby to avoid bad odors. They are composed of aluminum salts which allow this phenomenon!

Aluminum salts are most common in the form of aluminum chlorohydrate. They are very often found in antiperspirants on the cosmetics market. They have an astringent action and therefore make it possible to narrow the diameter of the pores , which decreases the flow of sweat. They also have a bactericidal capacity which eliminates bacteria from the skin flora, in order to avoid bad odors.

Despite their very high efficiency, they are controversial. Indeed, they are pointed out as being able to promote the appearance of breast cancer and cause undesirable effects such as eczema and irritation .

Unfortunately there is still no consensus between the different health organizations on the dangers of aluminum salt on the health of consumers ...

However, certain precautions must be taken into consideration: in particular, it is strongly recommended not to use them on damaged or shaved skin because yes they can be more easily absorbed by the skin and end up in the blood.

It is also preferable not to use antiperspirant before a workout or physical effort. Indeed, the fact that it clogs the pores prevents perspiration from passing and does not allow the body to regulate its temperature as it should!

Deodorants are just meant to prevent bad smells but don't prevent sweat from being secreted. They consist of antiseptic active ingredients which allow the elimination of bacteria. The most widely used antiseptic compounds are triclosan, ethylhexylglycerin and methylphenylbutanol.

They therefore do not in any way eliminate or reduce the production of sweat.

As a result, the feelings of discomfort due to humidity and the marks on the clothes remain the same. In addition, the use of active antiseptic can cause bacterial resistance which can make them less effective.

They can also be a source of irritation because they are less tolerated.

So what can you use without risking unwanted effects? 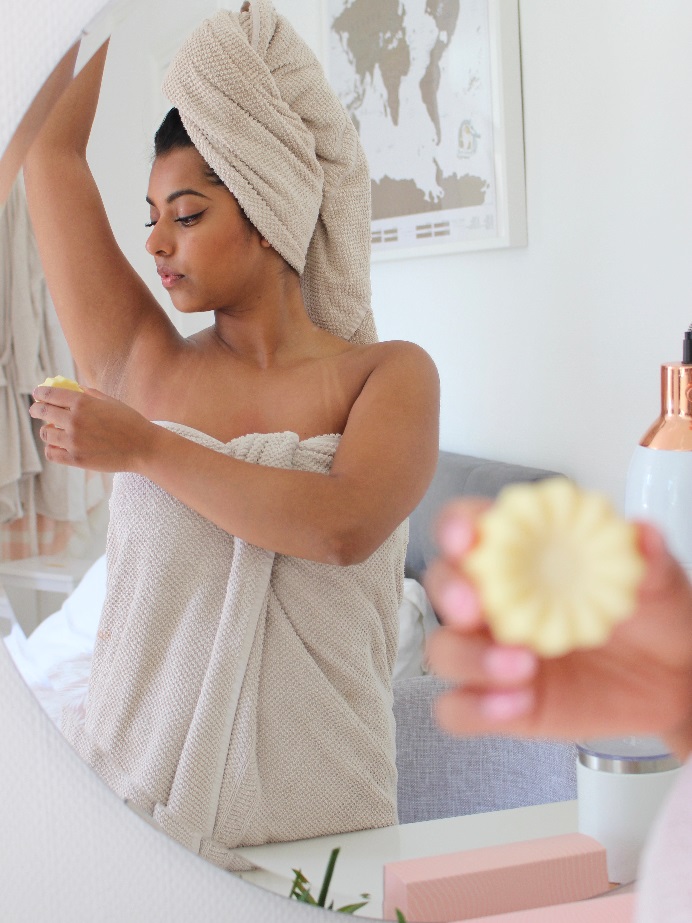 I recommend alternative compounds such as absorbents .

They allow to absorb odors and humidity while respecting our skin.

It is on this principle that ournatural deodorant recipemade up of:

Without preservatives because no aqueous phase, fragrance-free, allergen-free, natural and effective!

The real cost of cosmetics